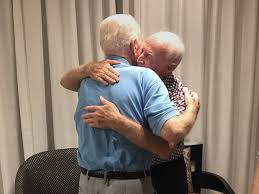 Morris Sana and Simon Mairowitz hadn’t seen one another for 75 years. The two cousins grew up together in Romania, before Nazi forces invaded, forcing their families to flee across Europe. The cousins were split up during their evacuation. Each believed that the other had died in a Nazi concentration camp along with the estimated 6 million Jews who were killed during the Holocaust.

In the aftermath of World War II, Sana and Mairowitz built separate lives after relocating to new homes. Sana, now 87, moved to Israel, where he lives with his family. Mairowitz, 85, lives in the United Kingdom. They never expected to see one another again.

Fortunately, using social media, family members began to connect and they learned that both cousins had survived. They arranged a renion in Israel. What happens next is a tearful reunion of two cousins who hadn’t seen each other since 1942.

Joe’s Perspective: Can you imagine? Imagine what it was like. Small children, playmates, best friends. Nazi’s invading your country. Fleeing, leaving everything behind. Separated, surviving, but believing that your cousin died like most others you knew. Living your whole life, not knowing that the other survived. Probably a short time before you die, you learn the other survived. The tearful reunion. Unbelievable, really.

Stories like this always remind me how good we all have it now. As bad as you might have it, it’s nothing compared to what these men went through. Loss, poverty, death, devastation… they went through it all. You might think you are having a bad day because you did poorly on a test or someone said something mean about you on social media. Stories like this provide me perspective. I hope it does the same for you.

Your Turn: What type of perspective does this story provide you about your life?