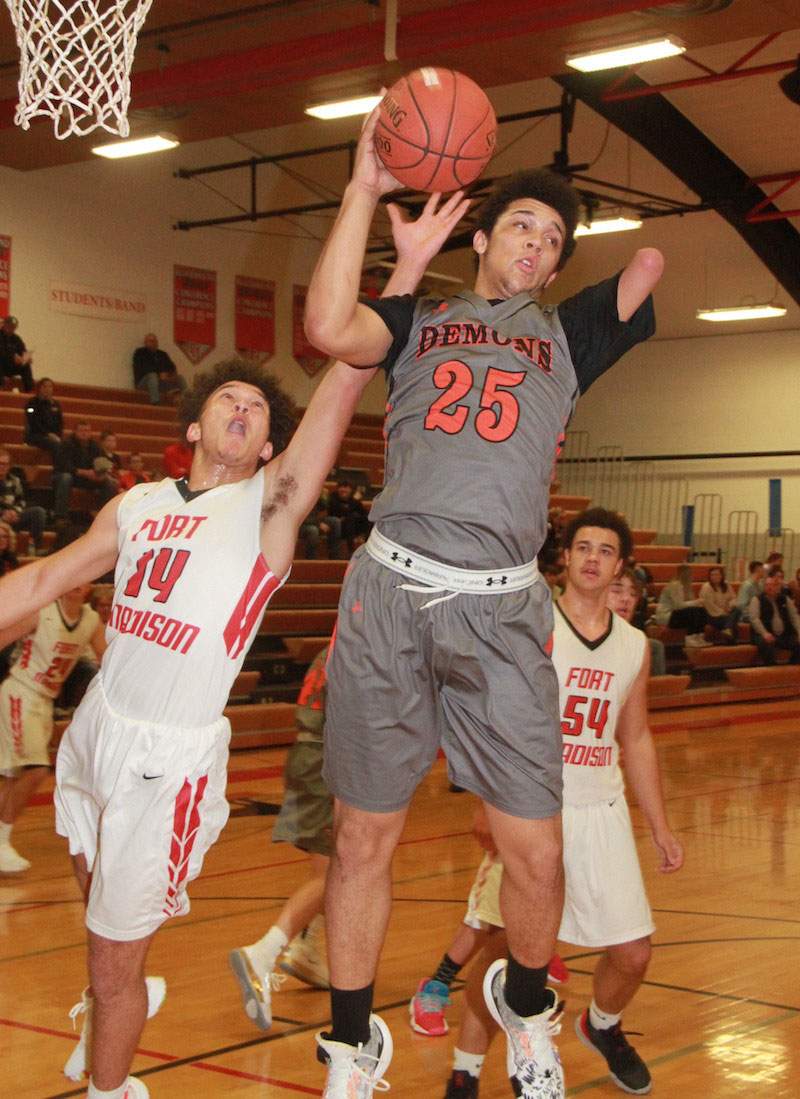 Trashaun Willis is a 6’5” 235 lb. junior at Washington High School in Washington, Iowa. He was the starting middle linebacker in football, recording the most tackles for loss on the team. He was also the backup quarterback, and is expected to be the starter as a senior. On the basketball court, he dunks, hits three pointers, defends and dives for loose balls. Trashaun is good – good enough to be recruited by several universities. “The ultimate goal is to make it to college and then hopefully the next level,” Trashaun says. “Whether it’s football or basketball, it doesn’t matter to me as long as I’m playing. I feel like I can compete with anyone on the court or on the field as long as I continue to push myself hard enough.”

With that type of size, one might expect Trashaun to dominate in athletics. The difference, however in this story, is that Trashaun only has one arm. You see, while in the womb, strands from his mother’s amniotic sack wrapped around his left elbow and stunted further growth. This rare event is called amniotic band syndrome.

So, from day one, Trashaun just found a way. “I refuse to say that I am disabled,” he said. “Because I’m not.” He learned how to tie his shoe and he learned how to shoot a basketball. No big deal. He just had to learn a little differently than most. In the 8th grade, Trashaun gained notoriety on the court when he dunked a basketball during a game. Chris Paul, an NBA superstar, also saw that video and visited him in the corn fields of Iowa. Pretty cool.

Joe’s Perspective: I’ve written about Jim Abbott, the one-handed pitcher who pitched a perfect game for the New York Yankees. I’ve written about Shaquem Griffin https://www.characterandleadership.com/shaquem-griffin-stuns/, who currently plays with the Seattle Seahawks. I’ve written about Bethany Hamilton who became a professional surfer, despite the loss of her left arm. Let’s not forget Kyle Maynard, who wrestled in high school, despite not having arms or legs.

Still, the story of Trashaun Willis should not be taken lightly. He found a way when others did not even try. Can you imagine how long it took him to tie his shoes? Can you imagine how long it took him to shoot a quality jump shot? This isn’t a story about his disability or his abilities. This is really a classic example of positive attitude, determination and perseverance. Just like Shaquem Griffin was a role model for Trashaun, Trashaun should be a role model for us. Everyone has challenges. Everyone struggles. Trashaun teaches us that we can never use excuses as reasons for not succeeding. The key in athletics and in life is to never stop trying.

Your Turn: How does the story of Trashaun Willis inspire you to be a better person and role model?