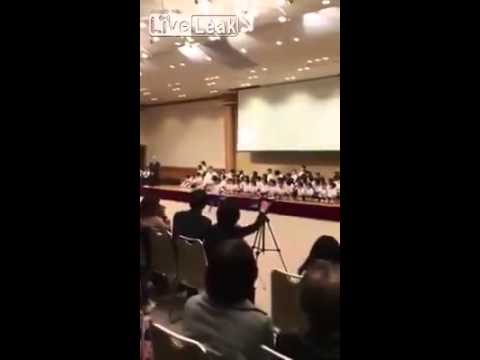 This is a very powerful video. It is so instructive. I hope we all pay attention. The funny thing is that I don’t know what anyone is saying in the video. I don’t speak Japanese. I don’t know the context of this video. Still, the power of the video is overwhelming.

What looks to be a 6-year-old boy (lets call him little Johnny), is performing at some sort of a recital. Parents of the participants are present. The little boy is supposed to jump over this barrier in one swoop. I imagine that most of his classmates have already accomplished this feat. However, little Johnny is unsuccessful at his first three attempts. He begins to cry. You can tell that he feels defeated.

After his 4th unsuccessful attempt, his classmates run from the stands to surround him. They form hands and say a loud chant. I imagine it’s something like, “Come on Johnny, you can do it. You’ve got to believe in yourself.” The boy takes another run at it. This time he makes it. And, literally, the crowd goes nuts.

Joe’s Perspective: I have never seen such a supportive culture. I would think if this were a school in America, some classmates would laugh, some would roll their eyes, and some would check the clock to see how much time this is taking. I do think some would also be supportive and yell something positive. However, in this school, all kids were rooting for him. All were supportive. All wanted little Johnny to succeed. It was like a force field of positive mojo.

So, the obvious question is, why don’t we have a supportive culture like this? Why don’t we support all of our friends and peers like this. Imagine if we had that type of enthusiasm for every child to succeed in school? In sports? In life? I wonder what we could accomplish if we did.

Your Turn: What would it take to create this type of positive culture in our American schools?